I'm just popping back for a moment here, to check in. As you have probably figured out, most of my energies have been going toward The Daily Science Fact lately. That stuff is hard!!

My main reason for writing today, however, is a little bit selfish: I just wired approximately $2000 to a man(?) named Nipple van Citroen, who claims to be a Dutch viscount. Apparently he needed the $2000 to get access to his castle (the Dutch government foreclosed on it) so he could pick up some of his family's art to sell. Depending on the art market, he assured me that he could get me $20-30,000 in return for my loan.

So . . . does this seem like a good deal, or did Nipple scam me? Has anyone else dealt with this guy?
Words: nipples, scams
0 Thoughts

It happened again! I've gone a whole roman month without writing for the Chesterton Review. I'm probably losing readers left and right. If you ever come back, readers, please know that I'm sorry for neglecting you.

You might be happy to know, however, that my absence here is largely due to my spending time on another project: The Daily Science Fact blog. The downside of DSF, like all my other projects, is that it can detract from the quality and quantity of TCR posts. The upside is that I'm doing my very best to have a new post on that blog every single day. This isn't as hard as you might think. Unlike the 'Review, which is rich, deep and original, each Daily Science Fact post is pretty brief, and can be drawn quickly from my tremendous mental reserve of science facts.

Like most of my projects, I've been keeping the DSF kind of on the down-low. But now I have nearly a month of posts built up, and more in the queue, so I figured it was time to open up the flood gates and let the bulls in.

I'm not sure that the DSF is quite appropriate for the general public, but if anyone out there knows a college science professor who is looking to enrich his (or, potentially, "her," I guess) curriculum, I recommend sending them a link.

Enjoy! And I'll be back! With bells on!
1 Thoughts 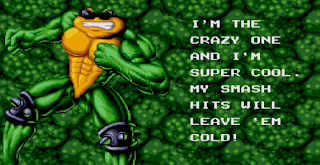 Ok, also, I don't know if y'all knew this, but I just found out that Battle Toads aren't real.

I mean, I knew the weren't real. But I still figured that there might be battle toads out there, sort of like armadillos or narwhals, you know?

What a bummer. Did you know that it was the Battle Toads who first taught me that the best way to beat something to death is with its own leg? But, now ... where did that lesson even come from?

PS—If he were even real, Rash the Battle Toad, pictured above, would have some major emotional hurdles to deal with. Who calls himself "super cool"? The crazy one indeed.

PPS—Oh, I'm just being sad. There's nothing wrong with you, Rash.
0 Thoughts

Just a couple of things.

Popeye's Fried Chicken is new in town, and I've been eager for the opportunity to support a struggling new business, so yesterday I went to the drive-thru to try out some of their Waffle Chicken Tenders. I was all the way to the point of confirming my order when the voice on the intercom asked if it was ok that they were all out of Honey Maple Dippin' Sauce. I don't think it was until then that I finally understood what "flabbergasted" really means. All I could say was, "Well, shit. I guess I'll wait." And then I drove away.

I was, and still am, very disappointed. And I'm disappointed in myself for not telling her that they might as well throw out all their goddamn waffle chicken tenders until they get restocked with honey maple sauce, because what's the fucking point otherwise? I have to assume that Popeye's International Inc. supplies each franchise with equal quantities of waffle chicken tenders and honey maple dippin' sauce, so what the damn hell happened there? They have a leak. Or some horrible Jabba the Hutt is just taking shots of dippin' sauce.

Argh. I'm still angry about this. I should report that location to Popeye, and he can have it burned to the ground.

Man, I'm a regular Jerry Sienfield today, right? I just have this stuff on my mind. I should write it down sometime!!

The other thing I wanted to mention is an idea I had for a TV show. It's called "Meth Lab." Originally, it was going to be about a labrador retriever who figured out how to make crystal meth, and then I guess it would just be like a Breaking Bad with (and for?) dogs. I realized later, though, that because of their paws and small brains, the idea of a dog synthesizing complex molecules doesn't make a lot of sense, and we'd have to use puppets or CGI for all of those scenes. What would work a lot better, I decided, was to instead have the show be about a labrador retriever who just smokes a lot of crystal meth. It's entirely plausible, as far as I'm concerned, that a dog would enjoy and become addicted to meth, and, as a bonus, we could still use a real dog for the smoking scenes. Depending on dogs' tolerance for meth, the post-credits blooper takes could be a lot of fun.

So, to sum things up:
Popeye's can go to hell until they act like goddamn adults and figure out what the deal is with their dippin' sauce, and if I get even the slightest notion that you're going to steal my Meth Lab idea, be prepared to wake up tied to a table in a burning Popeye's.


PS—I don't like to curse this much, typically, but that Popeye's nonsense really burns my bippy.
0 Thoughts

Well, that didn't pan out the way I expected

I don't mean to focus so much on website traffic metrics, but it's obviously been on my mind.

My last post hasn't generated the herpes sufferer traffic that the Internet had basically promised me. So far it has had two views. "Rhymes with 'Slurpee,'" you're never going to blast into the top 5 with an attitude like that. I mean, my posts are like my children, but you're maybe my least favorite child.


*To be honest, though, I had always assumed that the genitals of cave people atrophied and disappeared at about the same time as their eyes. After all, if you haven't got eyes, what's the point of testicles? (And don't say "reproducing." Aside from the queen and a couple drones, everyone knows that cave people are pretty much like Shakers.)
0 Thoughts